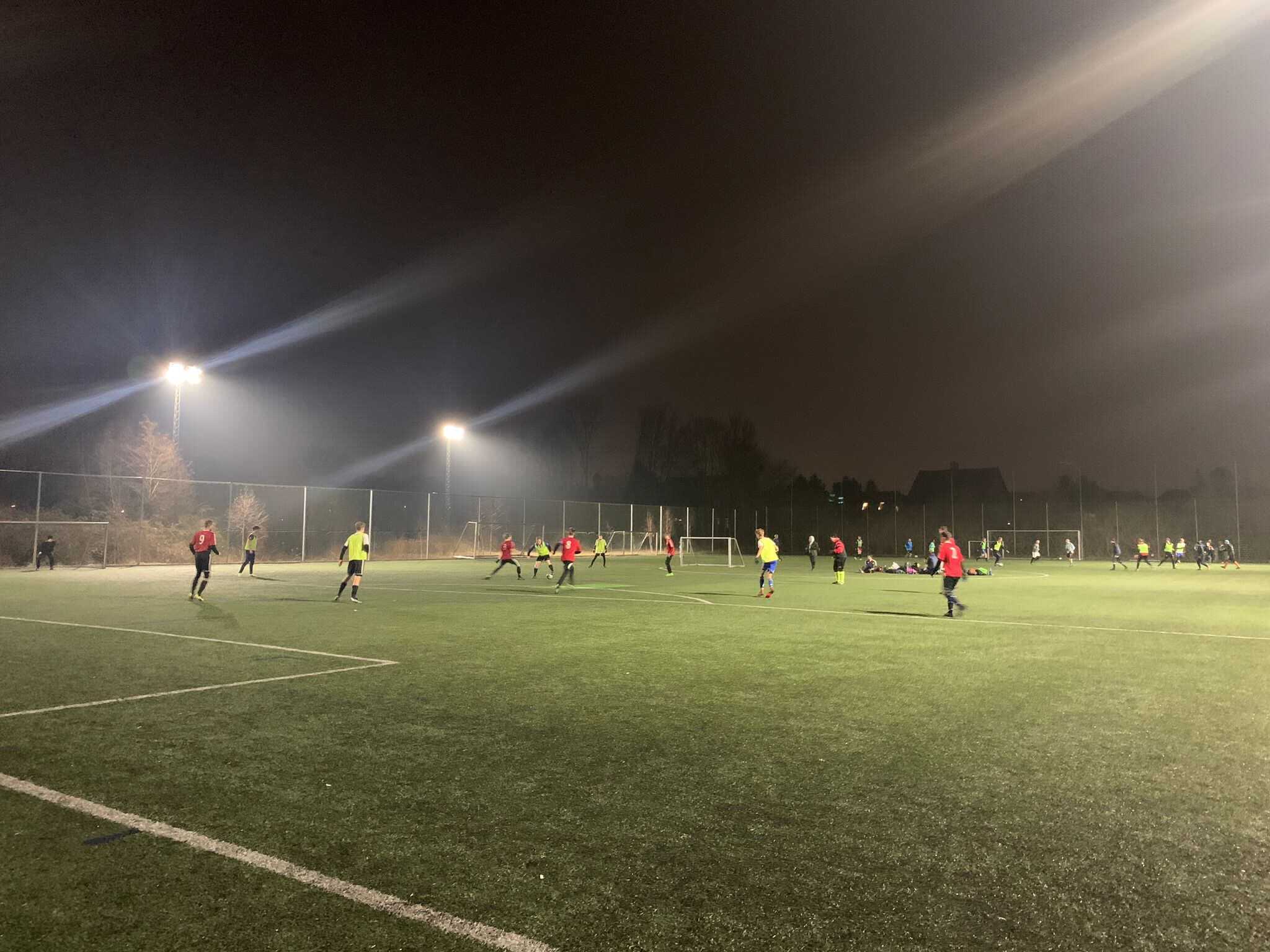 When dawn broke on the 16th March, the players of Volvox knew it wouldn’t be like any other day. Jack, for example, woke with a jolt at 4.30am, practiced 50 karate kicks and meditated while chanting “Success, success, success.” Irish Alex hadn’t slept all night, due to alternating nerves and determined strategizing. Magnus and Filip also hadn’t slept all night, admittedly because they were out partying to distract themselves from the weight of expectation.

The situation was this.

Volvox were in a respectable 3rd place or something, maybe 2nd I can’t remember. The chances of them winning the league had been scuppered earlier in the year by a combination of dodgy refereeing, (alleged) bribery and (allegedly) steroid-filled opposition.

But although they couldn’t finish top of the league, a far, far more important goal remained attainable: to be the first team in the history of professional football to go a full season without being defeated.

I know, it’s a tough concept to wrap your head around. “How?”, you ask, “how could it be that a team couldn’t suffer a defeat all season? Are they… invincible?”

The answer would be yes. This Volvox squad had a unique chance to become known in decades, centuries, millennia to come, quite simply, as “The Football Team Who Seemed To Possess Invincibility.”

Who was standing in the way of them and greatness, on the final fixture of the season? Oh, only BKUM, Champions-elect on their own Invincibility Quest, who had not even dropped a single point on their march to the trophy.

Could Volvox do it?

The match started with a flurry of activity, as the opposition’s physically-fit-but-mentally-slow backline was terrorised by Filip, Luka and to a lesser extent Jack. Chances came and went, and at times it looked like BFUN or whatever their names were simply couldn’t cope. Countless corners came, leading to at least 1 chance being created.

But slowly, BKUM began to grow into the game, though they were effectively stifled by the boots of Shields, the head of Martin, the body of Peters and at one point the face of Jack. Captain Anton (Capton) kept things ticking in midfield like a sexy metronome, more-than-ably replaced by Bjorn, while Magnus made an eye-catching season debut full of attacking prowess and dogged defensive determination in an even-more-eyecatching pair of designer (?) woollen gloves.

You would have to admit that with the run of play, BKRAP had a counter attack, spearheaded by their one good player, which led to a shot that was bravely saved by Alex (Peters) but the rebound was tapped home from a distance not even an idiot would miss. 1-0 to the Champions.

A few minutes later, around 25 minutes into the game, Jack decided to complete his first pass. Luka received, turned his man and attempted a shot. Unfortunately for him, it was off target, but by sheer coincidence, it turned into a beautifully weighted ball for Jack. Jack took a look at the keeper, and realised that the man between the sticks would be expecting the ball to be shot into the corner of the net at speed. Understanding this, Jack decided to subvert expectations, by scuffing the ball directly at the keeper. The masterplan worked, as the ball ricocheted of the hapless glovesman’s feet and dribbled over the line, barely touching the back of the net. Luka’s failed shot turned into an assist, the 13th time this unfortunate incidence had happened to him this season.

The score at half time, 1-1. All the lads agreed that a great defensive performance was being showed, with every player to a man doing their defensive duties admirably. All that was needed was a draw for us to be known in perpetuity as “The Football Team Who Seemed To Possess Invincibility.”

But was a draw good enough for the Titans of Volvox FC? Hmm… good question. Why don’t we ask Filip?

You see, as the players from BCHUMPS were still processing their half-time team talk of grunts and racial epithets, Volvox came out of the blocks like bullets made of passion. Luka had the ball. He attempted a shot! Again, it was horribly skewed, but was picked up by the run of Filip. Filip’s defender was a big, tall, gym-rat in too tight clothing to highlight his great big muscles. Filip shrugged him off like he was a collection of balloons cleverly arranged into a man, and fired home. Luka’s failed shot turned into an assist, the 14th time this unfortunate incidence had happened to him this season.

We had control, we had the lead. This was the time to go into phase 2 of our plan: to kind of sort of forget how to play football. This phase was characterised by confusion, poor marking, heroic defending and some wonderful saves from Peters, including a deflected shot that looked destined to loop over him, only to be stopped in its tracks by his great big Irish paw. Happy St Patrick’s Day Eve.

This tactical phase (“The Confusion Phase”) was brought to an end by the codewords exchanged between Peters and Jannik. “Subs!”/ “What?” / “Subs!” / “What?” / “FUCKING SUBS JANNIK GET THE FUCKING SUBS ON”. Onlookers might have been confused as to what exactly was being discussed, but Jannik and Peters had clearly rehearsed this before. Capton came on to help steady the midfield and the next phase could begin: Antagonisation.

It was around about this point that Jack decided to make a mortal enemy, with a man who appeared originally to be some kind of mystical dwarf, but upon closer inspection turned out to be a child. The child had kicked Jack in frustration and when Jack had questioned whether he should have done this, the child threw a tantrum and started telling Jack to calm down and, according to Capton, calling Jack a f***g cunt whenever Jack was out of earshot.

Luka won a freekick during a rare foray into the opponent’s half. The child and one of the non-descript, lolloping, meatbag, airhead defenders of BPRICKS took this brief pause as an opportunity to hold a conference complaining how Volvox were “Shithouse FC, for fandeme man” and that “they’re so lucky, and that’s the only reason they are winning. Also, I am on Russia’s side and I don’t think women should have the vote.”

Luka, meanwhile, was lining up the freekick. His shot was horribly miscued, but fortunately the ball flew onto the head of Jack, who barely had to move to head it in. Jack’s celebration was loud, exuberant, extremely aggressive, and directed entirely into the face of the small child who had only recently been complaining how lucky we all were. Ah, sweet, sweet poetic justice. Luka’s failed shot turned into an assist, the 15th time this unfortunate incidence had happened to him this season.

The rest of the game, Volvox FC took the opportunity to control the absolute living fuck out of proceedings. The opposition continued with their brave and incredibly clever tactic of shooting the ball from long range, through about 5 bodies. They met with limited success, due of course entirely to luck on Volvox’s part and not at all by their own mental shortcomings and tactical ineptitude. Martin made an excellent save off the line, following yet another save from Peters. Shields stopped one of the 3 million long-range pot-shots at the cost of his health, his ankle buckling under the sheer weight of his defensive prowess (and also the football).

Alex’s career-threatening injury (later confirmed to be cramp) threatened to destabilise our backline for the last 10 minutes so, but Bjorn did a superb job dropping back from Left Wing to Centre Back to keep things seamlessly smooth. Bjorn’s great job was matched (if not bettered) by my wife Rebecca running around the pitch to help the twice-as-tall-as-her Shields limp to safety, while subs Magnus and Filip admired her efforts from afar.

Nonetheless, these were difficult times for Volvox. We needed leadership, we needed tenacity, we needed the final burst of energy to get us over the line. Step up to the plate, Jannik. His performance in the final 10 minutes showed the young children of BKUNT FC how it’s done. Tom Brady, Lebron James, Cristiano Ronaldo (kind of), Leon Britton, Jannik Hansen are all showing, week in, week out, that experience and quality overcomes youthful exuberance every day of the week.

The final whistle sounded. Shithouse FC had taught the young upstarts a lesson in game management, team spirit and determination. Tactically, physically, emotionally they had been outplayed. Their abiding memory of their title-winning season will be of them disconsolately leaving their own pitch to the cries of “Invincibal-es” from the jubilant Volvox Squad and their record-breaking away support of 2 fans.